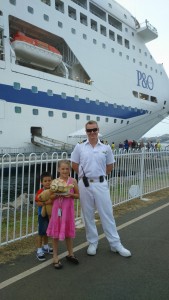 Just lately it seems that every person I speak to is cruising, either going to or returning from.  Last week we were able to catch up with long-time friends when they called into the port of Newcastle for a brief stop on their cruise. 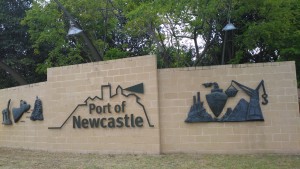 At first I thought Badley was joking when he said he was a cruise addict, however with more than 20 cruises in four years, methinks he might be serious.  This time they were on ‘Pacific Dawn’ http://www.pocruises.com.au/OurShips/Pages/PacificDawnCam.aspx.  Curious I did some research and found out ‘Pacific Dawn’ is Australia’s first super liner and is run by P&O Cruise Line’s.  The ship (I was duly informed by Bradley it isn’t a boat) was designed by Italian Renzo Piano and has an average capacity of 2050 passengers.

P&O cruises is one of the seven cruise bands under the Carnival Australia umbrella with this group accounting for more than 70% of the 833,348 Australians who took a cruise holiday in 2013.  Accounting to the group by 2015 they expect P&O Cruises will have the largest fleet home-ported year round in Australia.

After a day at the beach and none stop chatter, we set off with Snail in tow to wave them on their way. As we drove home the question was ‘What is the appeal?’ This is from one who likes to get to the destination as quickly as possible.  Perhaps the answer from those who choose to cruise is ‘it’s about the journey, not the destination!’