After a great hot chocolate and all too large piece of homemade slice at a local café https://www.facebook.com/TheOldHumeCafe/info where we also caught up on the latest local news, we were refreshed enough to continue on our journey.

One of the benefits of it being cold is that the sky is the most amazing shade of blue, combine this with rolling pastures dotted with new lambs, a road devoid of other cars and you have a very pleasant brief drive to Canberra.

Sitting snuggly within the Australian Capital Territory, Canberra is probably my all time favourite Australian city, though it is a close run with Melbourne.  Having lived and worked in Canberra for five years I had a good grasp of its layout, that was until….we moved, the pine forest burnt down, they put in more suburbs, changed the roads and I hadn’t visited in a couple of years….needless to say I got geographically embarrassed and had to phone a friend to confess my predicament.

The best thing though is we still have wonderful friends in Canberra and they, like many others, have fully supported my efforts with the book.  As we are in contact via letters and occasionally a Skype call there wasn’t a lot we hadn’t already covered thankfully, as what was left took us late into the evening.

After a breakfast guaranteed to see us through to at least Berrima (another of my all time favourites & a must do stop on the way home), we called in to see my Goddaughter who is studying at Canberra University, political related studies of cause!  You wouldn’t read about it, she has an apartment overlooking parliament house, now if that isn’t inspiration I don’t know what is! 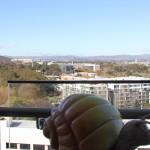 Chosen as the capital in 1901 Canberra is not only on the traditional land of the Ngunnawal people, it is an architecturally designed city thanks to Walter Burley Griffin, has some fantastic buildings like Parliament House, War Memorial & High Court as well as being home to the National Library & Paperchain Bookstore both of which house copies of ‘the Snail ate the mail’ & in the case of the later have it for sale http://www.paperchainbookstore.com.au/index.cfm.