Snail on the move – Gunning

I had an appointment with a book buyer in Canberra! So why were we in Gunning?  At less than 10 degrees Celsius I can see the Snail might need a jumper for this visit.

As my earliest memories equate Gunning and Canberra it seemed only reasonable, though cold, that we would call in.  Situated in the Southern Tablelands on the Old Hume Highway between Goulburn and Yass, Gunning is about 260km south west of Sydney and an hour’s drive from Canberra.  More importantly to me though, it is the closet town to my aunt’s farm. 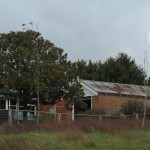 As a child the family would pack up the winter woollies and head to the farm over Easter or during part of the June holidays, either way it was always cold.  Part of the trip would entail driving down the wide main street of Gunning, it was always dark, often foggy but it heralded we didn’t have far to go. The width of the street is an indicator of the towns past when bullock carts where a means of transport to take the wool to major markets or bring in supplies to the farming families. 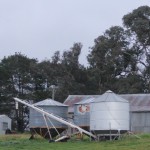 Until the 1820’s the colonial government banned settlers acquiring property outside a designated area centered on Sydney, Gunning was the ‘limit of settlement’.  The area was originally occupied by the Pajong ‘Fish People Tribe’, with the explorers Hume and Hovell being the first Europeans to the area.  Infamous people to visit the town or surrounds included the ‘Whitten Gang’ and the bushranger Ben Hall. A couple of other interesting historical facts, the town had a boot polishing factory, soft drink manufacturer and a rabbit freezing works. 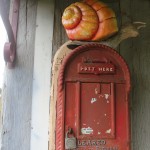 Pye Cottage c1886 is an original pioneer slab hut that is now a museum to the pioneers & settlers of the area.

The library was opened in 1925 and today services the town of just over 500 people and surrounding farms.  The librarian also happens to be my aunt and she arranged a book reading at Gunning Public School as she tells me country kids all too often get missed.  Needless to say both the library http://upperlachlan.nsw.gov.au and Gunning Public School now have copies of ‘the Snail ate the mail’. 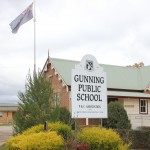 Until 1993 when the bypass opened it would take us 8 or more hours to get from our home to the farm, these days it is a pleasant 3 1/2 hour drive, unless of cause you are stopping at every book shop on the way! One of many treats in going to the farm (fresh cow’s milk was not a treat, the adults used to put it in a milk bottle so we wouldn’t know!) was a trip to Canberra.

So keeping with tradition, the next stop…Canberra……